What is Lupus erythematosus?

Systemic lupus erythematosus (SLE) is a chronic autoimmune disease mainly affecting women of childbearing age. It is estimated that there are up to 275,000 patients with SLE in the USA.[1] Worldwide up to 5 million people are expected to suffer from this disease.[2] Characteristic of lupus is a malar rash (Figure 1) from which the disease derives its name. With the typical form and the red color of the rash (erythros is Greek for red) people long ago were reminded of a wolf bite (lupus is Latin for wolf). Because today the rash is more associated with a butterfly, the butterfly has evolved as a symbol for SLE.

Patient with SLE showing the lupus-typical malar rash resembling the form of a butterfly.

In addition to the skin SLE affects different organs but immune complex glomerulonephritis (short: lupus nephritis) most strikingly influences the course of the disease. Approximately 55% of SLE patients are affected by the occurrence of lupus nephritis.[3] Moreover, 10-30% of patients with lupus nephritis progress to end stage renal disease (ESRD) resulting in hemodialysis or kidney transplantation.[4]

The pathogenesis of lupus nephritis (i.e. why and how lupus nephritis develops) has been the subject of intense research for many years. It is believed that auto-antibodies directed against double-stranded DNA accumulate in the kidneys where they trigger a fatal inflammatory reaction (Figure 2).[5] However, which mechanisms lead to the generation of detrimental SLE auto-antibodies is still unclear. What is known is only that these auto-antibodies are produced by the body’s own immune system. 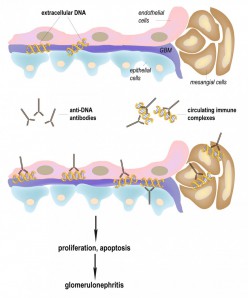 Induction of lupus nephritis by anti-DNA antibodies. Shown is a glomerulus linked to the filtration device of the kidney. Lupus-derived anti-DNA antibodies bind to extracellular DNA which itself can bind to the basement membranes of the glomerulus. The resulting immune deposits in the kidneys induce inflammatory reactions provoking either proliferation or cell death (apoptosis). Subsequent destruction of the kidneys and the loss of function can be measured by increased protein levels in the urine (proteinuria). Whether pre-existing immune complexes deposit in the kidneys (right panel) or whether anti-DNA antibodies bind to DNA which is already bound to glomerular basement membranes (left panel) is unclear.

A causative treatment of SLE does not exist at the moment. Based on the abnormal activation of the immune system, unselective immunosuppressive drugs remain the central strategy towards controlling the disease. Medication consists of an induction therapy with cyclophosphamide and prednisolone or mycophenolate mofetil followed by a maintenance therapy with azathioprine or mycophenolate mofetil.[6] Major side effects of these drugs are infections and they bear the risk of malignancies whereupon cyclophosphamide also causes amenorrhea.[7], [8] New hope for the treatment of SLE arose with the development of so-called biological drugs which are believed to allow a more selective suppression of the immune system. However, after initial euphoria, the mood has grown somber since none of the numerous biologicals was shown to improve lupus nephritis (link: Biologicals for the treatment of SLE – new hope or expensive drugs without benefit?).

Due to the application of immunosuppressive drugs, the survival of patients with lupus-associated glomerulonephritis increased from a 5-year survival of 44% in the 1950s to a 10-year survival of 88% recently.[9] Despite these advances in the treatment of SLE, the life expectancy of patients with lupus and renal damage was recently demonstrated to be 23.7 years shorter than that of the general population.[10] Moreover, the incidence of ESRD associated with lupus nephritis has not decreased over the last few years.[11] In addition, considering the formidable impairment of patients with lupus nephritis (caused by hemodialysis and other comorbidities), it is obvious that the treatment of SLE still remains an unmet medical need.