I am a surgeon and since 2014 I have specialized in thoracic surgery. As an academic surgeon, I have been a research group leader for many years. The initial interest of my work was cancer research. As a surgeon, I was not really aware of systemic lupus erythematosus (SLE) or other autoimmune diseases until an experiment about seven years ago which started as a routine cancer research experiment. The results of this experiment were so unexpected that I mused about them more than half a year before deciding to follow up the case. The hypothesis was that it might possible to suppress fatal hypersensitivity reaction with the topoisomerase I inhibitor irinotecan. To evaluate this hypothesis we started with anaphylactic shock and failed. We continued with autoimmune diabetes and failed again. This situation evoked serious doubts about this unusual project, which – at that time – was not supported by third-party funds. I began to think that it might have been a pipe dream. However, a couple of weeks later our lupus-prone mice suddenly demonstrated amazing effects.

The mice used for these experiments were the first generation of mice crossbred from New Zealand Black and New Zealand White mice (two natural occurring strains), known as NZB/NZW mice. NZB/NZW mice spontaneously develop a lupus-like disease with antinuclear antibodies, hemolytic anemia, proteinuria, and progressive glomerulonephritis resembling human SLE. [1] However, although this animal model has been used for more than 60 years and more than 700 publications with NZB/W mice exist, only very few research groups have been able to successfully treat NZB/W mice with advanced (or established) lupus nephritis which most likely reflects the patient’s situation. Therapy of established lupus nephritis means that treatment started at the point when the mice already had damaged kidneys, demonstrated by a loss of blood protein. The loss of blood protein can be measured by increased levels of protein in the urine (proteinuria). Interestingly, with the current standard SLE medication it was not possible to reverse established proteinuria in NZB/W mice.[2] [3] [4]

We were able to show that the topoisomerase I inhibitor irinotecan improved advanced lupus nephritis and significantly prolonged the survival of NZB/W mice.[5] However, an unfavorable aspect of these first findings was that we had applied doses of irinotecan similar to those used in chemotherapy to treat humans. Hence it was questionable whether irinotecan might be a realistic new treatment option for a disease which mainly affects women of childbearing age. Consequently, we started experiments evaluating the effect of reduced irintecan doses on the course of SLE. Figure 1 shows such an experiment in lupus-prone mice when an irinotecan dose was applied which was eight times lower than the dose used for chemotherapy. Finally, we were able to demonstrate that an irinotecan dose which was 50 times lower than the dose used for chemotherapy ameliorated existing lupus nephritis and significantly prolonged survival in lupus-prone NZB/W mice.[6]

Figure 1: Suppression of lupus nephritis and prolonged survival of lupus-prone NZB/W mice treated with low-dose irinotecan. The onset of lupus nephritis was determined by the loss of protein in the urine (proteinuria). A proteinuria grade 4+ corresponds to the level of severe lupus nephritis (published in Arthritis Rheumatol. 2014 Aug; 66(8):2259-69).

Based on these results, we deduced that the effects and mechanisms of irinotecan used in chemotherapy are not the same those used for the suppression of SLE. This hypothesis was supported by subsequent laboratory investigations aimed at discovering how the molecular mechanism of irinotecan influenced the course of SLE. So far the following results have been obtained: 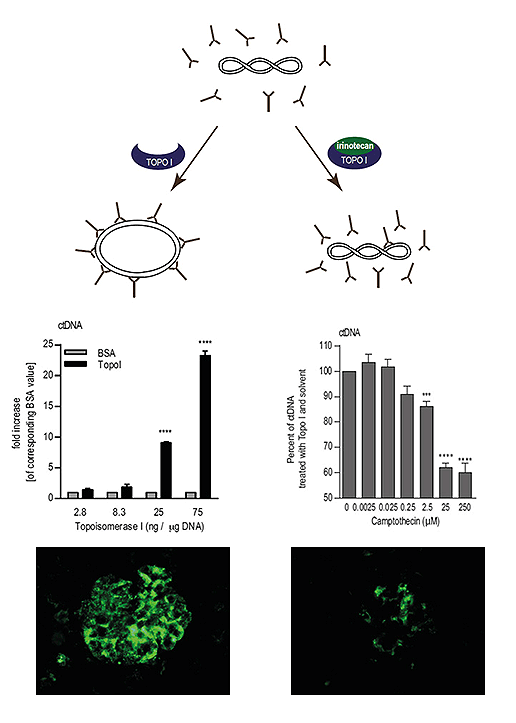 Figure 2: Scheme illustrating how the level of DNA relaxation influences the level of lupus-derived auto-antibody binding directed against double-stranded DNA. It is further shown how this effect might explain irinotecan-mediated effects on lupus nephritis (published in J Immunol. 2010 Feb 15; 184(4):2175-82 and Arthritis Rheumatol. 2014 Aug; 66(8):2259-69).