Topoisomerase I and Irinotecan

Topoisomerase I is an enzyme (i.e. a protein catalyzing certain biochemical reactions) which is expressed in almost every cell of the body and which is highly conserved in the phylogenetic tree.[1] Its major function is the relaxation of DNA (desoxyribonucleic acid, the genetic material). Most DNA exists as double helix (i.e. double-stranded). The double helix is normally self-winding to achieve compact DNA which fits into the small nucleus of the cell. Under certain circumstances such as cell division an over-winding (supercoiling) of the DNA takes place. Such supercoiling of the double-stranded DNA induces torsional stress at the DNA helix bearing the risk of uncontrolled strand breaks. In order to release torsional stress from the DNA, topoisomerase I binds to the DNA and cleaves one DNA strand. This allows the rotation of the cleaved strand around the other in a controlled reaction (DNA relaxation). Afterwards, the nicked strand is re-ligated by topoisomerase I, thus restoring intact double-stranded DNA. (Figure 1) [2]

Figure 1: DNA relaxation mediated by the enzyme topoisomerase I. 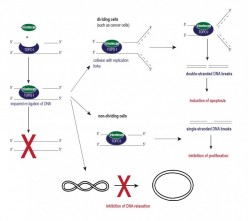 Figure 2: Effects of the topoisomerase I inhibitor irinotecan on the structure of DNA with subsequent cellular changes.